This article first published 2/13/20 by the Minnesota Spokesman-Recorder  https://spokesman-recorder.com/2020/02/13/negative-reactions-to-kobes-death-not-as-straightforward-as-they-seem/

For everyone within earshot of these virtual disputes over whether Kobe Bryant deserves our mercy in death, do NOT think this is some isolated argument about a celebrity with a checkered past.

It is about the fire next time, and who, exactly is going to be engulfed in flames.

The obvious racial schism in this debate underscores the oligarch’s success in transforming a class war into a race war. History is fairly clear about what comes next: White and Black will reconcile, and we will fight together against our rulers; or Whites will turn on us violently, and America will revert to 1919 or Nazi Germany, or some combination thereof.

Am I saying that all White people must agree with me or with Black people generally? I most assuredly am not. What I am saying is that if White people understood that the ONLY way they will be saved is by collaborating with us as full and equal partners, they would, at the very least, respect our losses and our community as we always have theirs. Their dehumanizing language, contemptuous tone, and binary narratives (“you’re either with us or against us”) tells me that Black people better brace to defend ourselves and party like its 1919 all over again.

I was not a Kobe fan especially. Had Allen Iverson or Dwyane Wade or LeBron died in a helicopter crash, I would likely be beside myself with grief. And I certainly understand anyone who says that they are not mourning a celebrity, with a checkered past, who they did not know. But I remember Kobe’s dad when he played alongside my childhood idol, Dr. J, and I remember how Kobe gave such joy to so many children, Black and White, the way Dr. J did for me. What’s more, I know that at 41, he might well have redeemed himself for the tremendous pain he inflicted on that young woman in a Colorado hotel. His death saddens me, if only because it saddens others, and because he may have contributed great things to this world before all was said and done.

What I don’t understand, however, is the gracelessness of people who cheer his death, the way some cheered him on the court. But for some reason, the White settler needs the Black man, and the Black woman on the stake, like Jesus, suffering, dying, for your sins, for no other reason, I believe, than that it reassures them that no matter how much things change, they will forever be the master, and we will forever be their slaves. For this reason, and only this reason, the laboring classes in America are a defeated people, and will remain so for as long as we walk this earth.

And if you think I am wrong, if you doubt what I am saying is true, then answer this question: would White women who are so outraged by Kobe be so animated, so contemptuous, so hateful, if his victim had been Black? 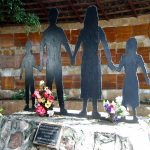